Our state-of-the-art Palm Beach Marina has another great amenity beyond its high-end, spacious, well-run facility. It's got the amazing island Town at its doorstep. For the last 100 years, the 16-mile secluded barrier island has been effortlessly casual, with small-town character and upscale sophistication. Drop your anchor, step off your yacht and grab your bike or walking shoes, join us for this fascinating history tour for the day.

The Palm Beach Marina itself has a long and storied history. It has been providing berthing for yachts since the 1940s. Before the transformation of the old “Town Docks” in 2021, the Marina could only accommodate one vessel greater than 200 feet. Today, it can berth up to 10 yachts of this size.

As you step onto land, you’ll find yourself in the serene and historic Lake Drive Park, surrounded by large banyan trees and beautiful, lush green grass — perfect for a scenic picnic or a breezy stop for an optimal view of the water and the Marina. The park is connected to the five-and-a-half-mile palm tree-lined Lake Trail, which runs along the western side of Palm Beach (be sure to check out the many fascinating historical markers planted along the trail).

As you traverse the trail, you might think the Town was named for its palms, but it's actually because of a boat gone adrift — talk about a “lega-sea.” In 1878 “The Providencia” ran aground offshore with 20,000 Trinidadian coconuts bound from Havana to Barcelona. Early settlers salvaged and planted the coconuts, which were NOT native to South Florida, and the island became known as Palm City. Eventually, it was renamed Palm Beach in an attempt to turn it into a commercial coconut growing destination. In the 1890’s Industrialist Henry Flagler, as he extended his railroad and hotel empire down the Florida coast, had a different idea. He saw Palm Beach as the perfect untapped gem that could appeal to affluent northerns seeking sun, sand, and ... palm trees.

As you head northbound along Lake Trail, you’ll discover a giant “Kapok” tree with octopus-like roots transplanted as an experimental crop from the Amazon rainforest, before landing at Flager’s 75-room palace-like home built for his wife, previously known as Whitehall — oh, buoy, now that's what we call a wedding present!

After Flager’s passing, Whitehall was converted into an eleven-story hotel from 1925 to 1959, during which the original portion of the house was used for lobbies, card rooms, lounges, a bar, and guest suites. In danger of being razed in 1959, Flagler’s granddaughter, formed a nonprofit corporation, the Henry Morrison Flagler Museum, to purchase the property. In 1963, the museum was opened and a few years later the upper ten stories of the hotel addition were demolished.

Whitehall is known today as the Henry Flagler Museum, a National Historic Landmark, features white marble steps, towering columns, and an intricately decorated door and is open to the public featuring guided tours, changing exhibits, and special programs. Be sure to check out Flagler’s private railcar on display at the Museum.

Along with his mansion, Flagler built the six-story 1,100-room Royal Poinciana Hotel in 1894, reputed to be the largest wooden structure globally. After falling into despair, it was later demolished.

Flager also built the Palm Beach Inn in 1896, a premier oceanfront hotel that delighted guests with its proximity to the water and unique location—right at “the breakers,” where the waves crashed and sprayed. Today, The Breakers remains an impressive masterpiece of Gilded Age luxury and one of the world’s still operating resorts.

Going south from the Marina, you reach what was Florida’s first tourist attraction at the end of Lake Trail and the west entrance of Worth Avenue, Alligator Joe’s Pavillion. Guests lined up to be entertained by Alligator Joe wrestling the reptiles. Today, the iconic location is home to the Everglades Club, a social club that features a very private 18-hole Everglades Golf Course. Designed by architect Addison Mizner, the Everglades Club was built in 1918 as a World War I veterans’ convalescent home, but after the war ended, it was changed into a private club. Still operating today, it is believed to have about 1,000 members but has never provided a members list — and that's the definition of exclusive! Photos and cell phones are discouraged in the club, and it is so private that they don’t even have a website.

Mizner designed more than 50 Palm Beach villas and Florida mansions for the nation's leading social families. Known for his Mediterranean and Spanish style, he created the iconic “Palm Beach” look — a mélange of deliciously diverse architectural influences, or as we say, iconic. Just as popular as he was, so were his menagerie of pets – macaws, anteaters, raccoons, and monkeys. You can visit the burial site of Addison Mizner’s late pet Johnnie Brown, ‘the human monkey’, tucked into a courtyard on Worth Ave. His home, on Via Mizner, has become a historic site that you can peruse as you explore the shopping nirvana of Worth Avenue.

Heading East on Worth Avenue

Head east on what was once a dirt road long ago, now Worth Avenue. Known as simply “The Avenue” by locals you can lose yourself in the labyrinth of "vias''. The quaint, pedestrian-only alleyways, lead you off the main avenue toward some of the best upscale shopping and world-class restaurants, from well-known international brands to local boutiques. Feast yourself on designer eye candy, including the creations of the emblematic Palm Beacher Lilly Pulitzer — look closely and you’ll spot her ‘Lilly” signature hidden in the whimsical designs. At the eastern end, the ocean awaits you with the Town’s landmark Clock Tower - the perfect place to enjoy picturesque sunsets. The Clock Tower, originally built to monument the Palm Beach Pier, which was destroyed by a series of hurricanes, now symbolizes the fact that time moves on, but Worth Avenue’s magical charm is timeless.

A few miles south of the Marina is the award-winning Par 3 Golf Course, equal parts challenge and relaxation. Docking at the Palm Beach Marina grants limited complimentary access to the oceanfront 18-hole course which features water hazards, sand bunkers, a driving range, and an eatery with sea views. Shop, dine, and relax at their on-site clubhouse! You'll find the fully stocked golf shop on the first floor and the restaurant on the second — ocean views and a house special “golf-ball” appetizer… yes, please! It’s the perfect destination for any golf enthusiast looking to practice their swing! If golf isn’t your sport of choice, explore the adjacent Seaview and Phipps Ocean Park Tennis Centers! On your way to Phipps Ocean Park, be sure to explore the Little Red Schoolhouse, the first schoolhouse in southeast Florida.

Whether you are a resident or planning a quick getaway, Palm Beach is the perfect place to revitalize, refresh, and rejuvenate. And there is no better way to experience the island than to roam and take in all of its history. The Town is a one of a kind, lavish, luxurious, and vibrant destination – from the prominent architectural treasures, gorgeous gardens, upscale shopping, and international dining options, to its balmy ocean breeze on the miles of exquisite beaches. We hope to see you at the Marina and or exploring Palm Beach. Happy promenading! For slip reservations, visit TownOfPalmBeachMarina.com. 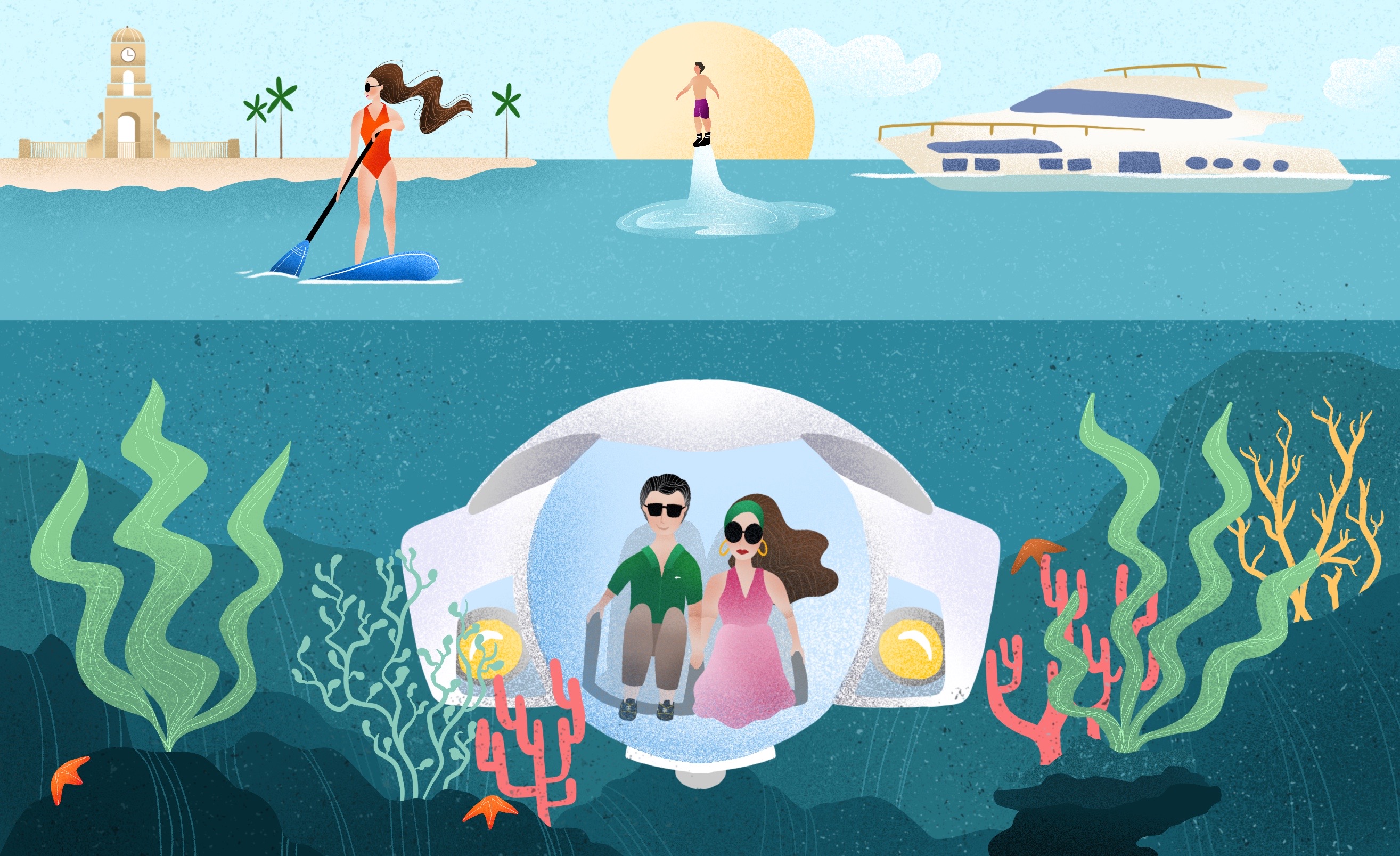 “Yachts” of Fun in the Sun 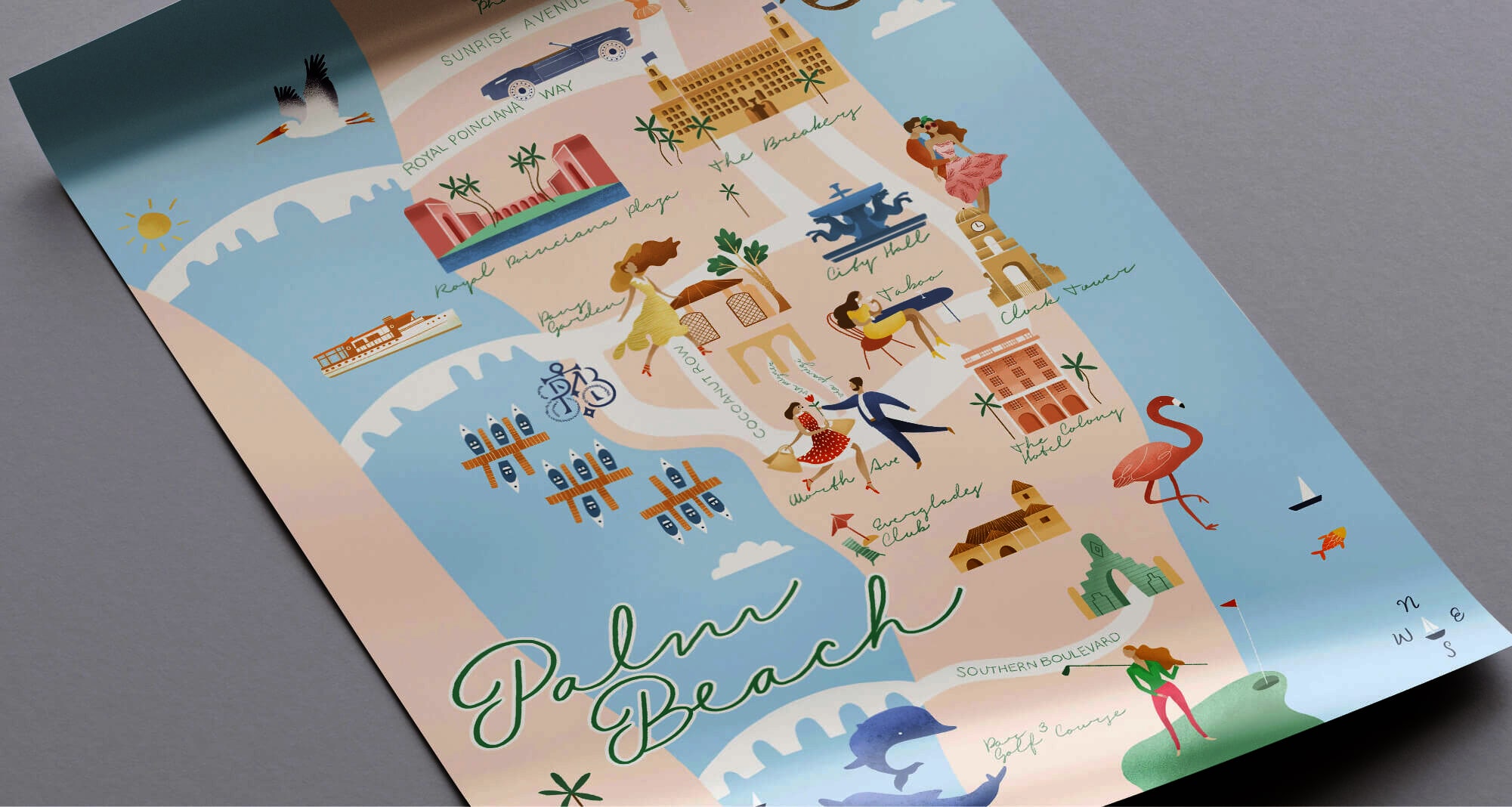